How To Design An Incentive Compensation Plan 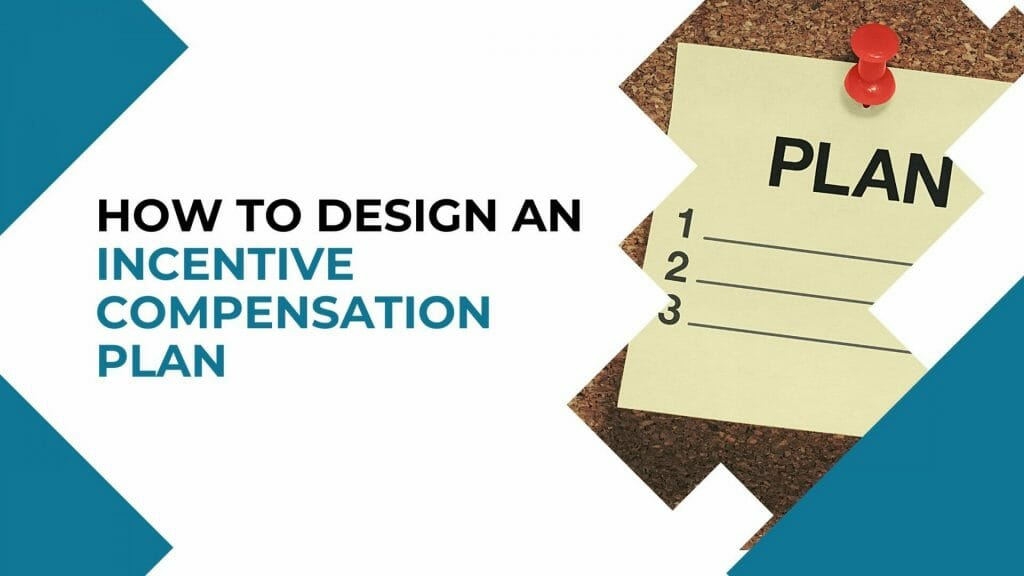 As a manager, you are always looking for new ways to motivate your employees. Incentive programs are one method for achieving this.

However, the main issue with designing an incentive plan is that it takes into account many different factors, such as the sales rep’s behavior with the organization’s goals, as well as their performance. In this blog post, we will delve deeper into the various types of incentive compensation programs used in the industry and help you pick the one which aligns with your company goals.

Step-by-step compensation (sales vs target bonus) and commissioning are the two common methods used when designing an incentive compensation plan.

Step-by-Step compensation is also highly suitable when the sales rep is not solely responsible for the act of sale and must collaborate with other teams (technical support, engineers, customer service, etc.) to complete the sale. This benefit allows for a more thorough consideration of the qualitative aspects of the commercial relationship.

The major drawback here is that it is not completely quantitative.

Commissioning, on the other hand, is a common practice in most companies. The commission has the advantage of being simple to implement and comprehend by sales teams.  It answers the principle “The more I sell, the more I earn”.

Usually, the sales rep should generate a minimum number of sales. Companies that pay their sales team commissions usually prefer to pay them a small fixed share of the money they make (55 to 70 percent of total compensation, compared to an average of 70 to 75 percent observed in companies). The fixed part pays for the job itself. As a result, we can conclude that a salesperson must generate a minimum of sales in order to perform well in his position, which means that they won’t get paid for the first dollar of sales they make. This helps to avoid the “redundant effect” of commissioning, which, after a few years, often leads to rents and bonuses just because you have a lot of well-known customers.

Some qualitative objectives, such as customer satisfaction, are not fostered by commissioning. Furthermore, it fosters competition among sales reps, which can jeopardize the sales team’s overall success and effectiveness.

Therefore, the commissioning model is appropriate for sales lines of any size that have a strong sales culture and in which sales representatives are solely responsible for the sales act, with no intervention from other teams. But it is not suitable for an organization that focuses on qualitative objectives such as customer satisfaction or playing a vital role in the sales process.

Mix up the system, get the best of both worlds

The best possible way to design an effective incentive compensation plan would be to opt for a mixed system approach, that is, combining target bonus and commission.

This might be a monthly variable pay based on your salesperson’s revenue earned, to which we add quarterly or semi-annual bonuses based on the attainment of qualitative targets. Furthermore, the incentive compensation chosen may differ by employee type, depending on whether the primary goal is, for example, to follow up with clients on a daily basis or to acquire new customers.

Other important factors to consider when designing an incentive compensation plan

The company has to do quite a bit of legwork to get the foundation of a plan set up.

1. The company needs to do vast market research within their business niche and what their employees would be making elsewhere to get a respectable range of base salary established.

2. The company should get a  broad sense of their competitors’ payouts in the scope of incentive compensation plans.

3. Figure out how much your company can pay out within these plans and figure out internal tiers within the framework of the plan. Some of the questions to consider are

Will the plan be based on a specific company quarterly goal?

Will the company also include long-term goals (yearly sales, etc.) for a bigger yearly incentive?

Once established, your sales compensation plan will not only attract new employees to your company but also retain the ones you have already.

The Importance Of Incentive Plans

Are these incentive plans really that important in the grand scheme of things for an organization?  The answer to that question is yes!  Think about this in terms of uniqueness, what separates your company from others that are in pursuit of the same recruit?

Every company offers more or less the same types of benefits (insurance, vacation time, etc.) and base salary (market-specific) but one area that a company can differentiate itself from others is the incentive plan.

You can also think in terms of psychological benefits to the recruit as well.  One of the tiers of Maslow’s Hierarchy Of Needs is Esteem which is delivered in spades with recognition of one’s performance.  Rewarding that performance with monetary incentive satiates this basic need and also inspires the employee to not only meet the business goals the next quarter but reach for a higher number!

Incentive compensation from a sales rep’s perspective – Story of Michael

Recruitment – The Story Of Michael

Let’s look at an example:  Michael has done well at the small company that he works for.  Michael works in outside sales at a department that only employs six other sellers.  He has proven himself through hard work and learning the subtle nuances needed to become the best salesperson in the company.  You could say that Michael has become a big fish in a small pond and he’s looking for bigger ponds to swim in.  Michael is being courted by ten different large companies scattered around the country.  A couple in Silicon Valley, one in Los Angeles, one in Austin, Texas, another in Toronto, and a few others in big cities.

There are small market differences in what each company can offer in compensation.  San Jose & Los Angeles are the most expensive markets in the country, so it’s no surprise that they offer the biggest contract to Michael.  Does Michael want to make the move to such a busy market?  The company in Toronto also offers a good-paying contract, Michael must consider that offer and what it entails.  He would have to get a work visa and calculate the currency exchange rate between the Canadian and American dollars.  Michael strongly considers the offer from the company in Austin, Texas.

Austin is a growing market that is courting practically all of the big tech companies in Silicon Valley.  Both Tesla and Oracle have moved some offices there and the city is looking to bring more companies into town with tax incentives and other amenities.  These are all things to consider for Michael, but perhaps the biggest incentive for him to consider the Austin company is that the company has the best incentive compensation plan out of all the companies looking to recruit him.

As long as the compensation plans mentioned above align with corporate goals, you will be able to remunerate your agents at various levels and effectively track their progress.